January 23, 2009 By J. in Idle ramblings, Leadership, Learning from others, Uncategorized Leave a comment

Thanks to a friend, I was introduced to this really cool website that literally turns words into an art form. Wordle.net creates “word clouds” in which the most used words take a more prominent place than lesser used ones. Commonly used words like “a,” and “the,” are left out, leaving only the major ones to find their place in a Wordle.

The program is the brainchild of Jonathan Feinberg who, on IBM’s nickel, produced this amazing piece of code that’s entirely free to all of us. Feinberg, who claims the site gets about ten hits a second, collaborated with a couple dozen people-among them artists, software developers, Java experts-to visually depict the power of language.

Although uses for Wordle seem more whimsical than practical, a word cloud, if studied, can say much about the meaning of a speech, phrase or letter, etc. Here, for example, is a word cloud of Barack Obama’s inaugural speech using the program’s standard setting which automatically filters out commonly used words. 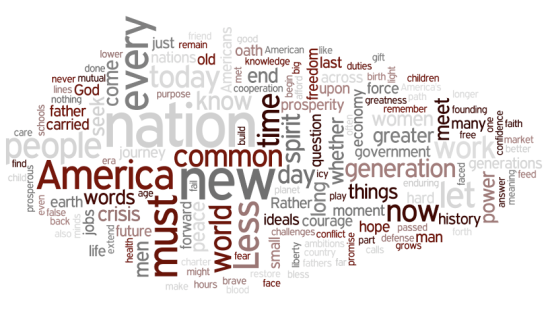 In this rendition, “new,” “nation” and “America” seem to be the most frequently used by the new President.

However, a different pattern emerges when automatic filtering is turned off.

And, it would seem that Obama is saying…?